Steel Plantech provides the Bar and Wire Rod Rolling System that meet variety of customer needs.
For example, we provide solutions that meet customer needs such as the Slit Rolling System and the High Speed Mill (40m/s) which increase productivity, the Hot Direct Rolling System which is directly connected with a continuous caster, not via a reheating furnace, and thereby greatly reduces the energy consumption, the Water Quenching System which helps in enhancing the strength of bars, and Endless Bar Rolling System (EBROS™) which significantly boosts yield.
Moreover, we can suggest and provide a package solution by supplying integrated lines of electric arc furnaces, continuous casting facility and rolling mills. Using a block mill, which drives multiple rolling mills and has been used on 100m/s class wire rod lines, as the bar steel finishing mill, will achieve speeds far beyond the finishing speed of about 20m/s that was the limit of conventional mills. Rolling using ultra-hard rolls provides advantages such as precise measurements and enhanced surface finish.Additional advantages are easier roll exchange and maintenance.

Ordinarily, shears were start-stop types, which began moving when the shearing point arrived. However, there was a limit to the speed of the blade rotation (shearing speed) because the blades went from a standstill then began rotation and acceleration. Continuous rotating shears were adopted for the HSDS system, enabling faster shearing speeds. This makes stable shearing possible at even faster rolling speeds. EBROS™ stands for Endless Bar Rolling System. Its objective is to enhance productivity and yield ratios.
Simply put, the function of the EBROS™ is to weld the heads and tails of the billets that are extracted at constant intervals from a reheating furnace, and to create a billet of unlimited lengths.

HDR (Hot Direct Rolling) is a system where the billet from a continuous casting facility is conveyed through roller table and directly input into a mill without being reheated. It is an excellent energy-saving technology.

For the realization of this HDR system, comprehensive engineering capabilities for furnaces and continuous casting and rolling facilities are required. Such includes (1) high-temperature casting technology; (2) technology to minimize the temperature decrease; and (3) optimal layout for delivery to the next process.

We, Steel Plantech, will make the utmost use of these comprehensive engineering technologies to meet our customers’ needs. 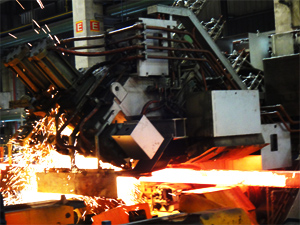 The manufacturing of water-cooled reinforced steel is possible through an online heat treatment process in the rolling mill line. There is no need to add expensive alloy elements vanadium and niobium. Placing a flaw detector immediately after the finishing mill has made it possible to track the position of surface flaws on special-form steel bar products. This enables operators to be notified of where that flaw ultimately is on the product, thereby making it possible to significantly reduce the mixing in of defective products. →Fixed pass line that enables stable rolling
→Shim adjustment, carried out at the roll shop according to the roll diameter, unnecessary The chockless stand does not have a chock, and has an extremely rigid structure. The mechanism makes it possible to adjust the spaces of the upper and lower rolls symmetrically with the pass line by using the worm screw to turn the eccentric sleeve that has been built into the roll axis.